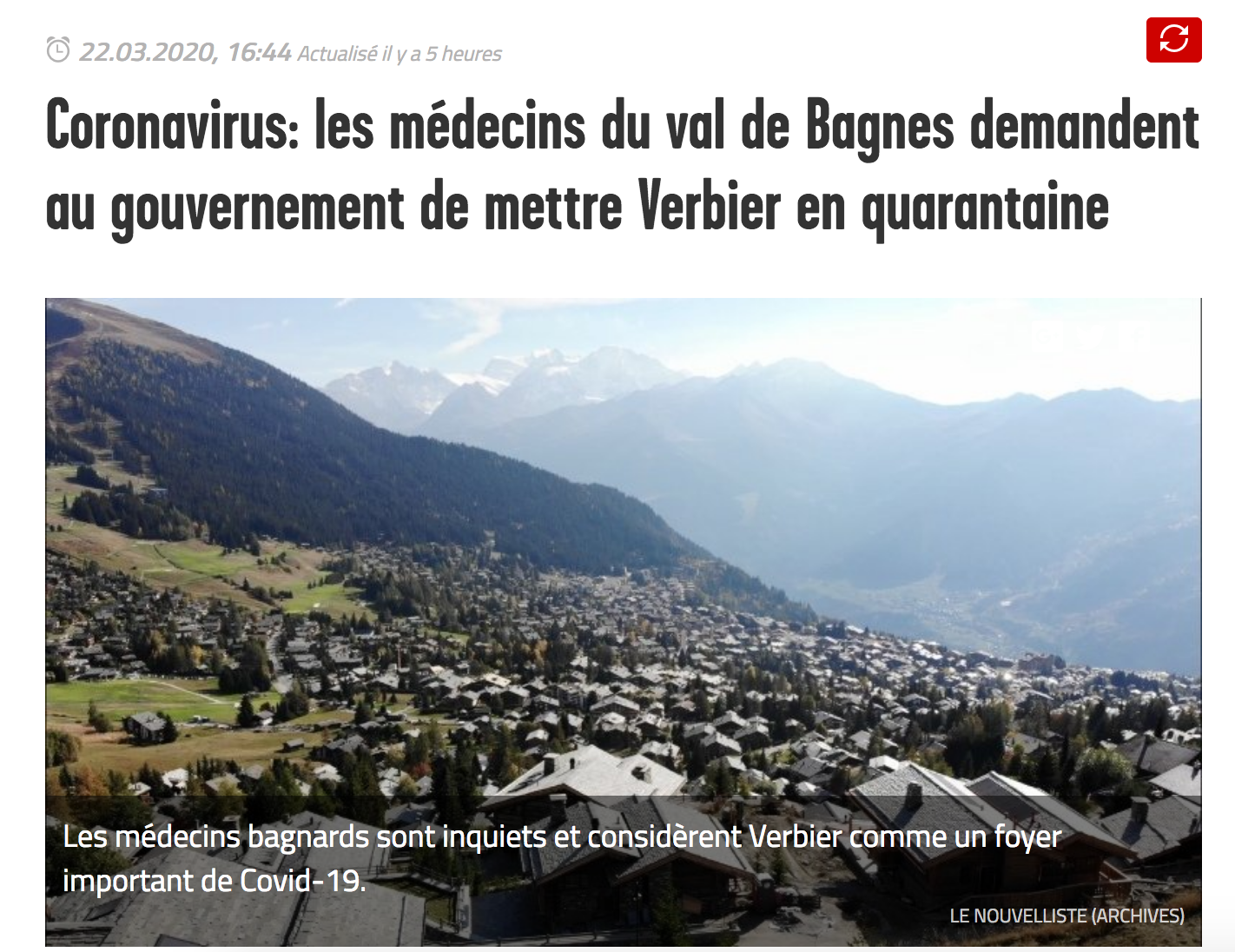 Doctors in Val de Bagnes sound the alarm. Verbier is believed to be a major hub of Covid-19 cases. To avoid “a catastrophe”, they implore the authorities to pronounce a quarantine on the resort, even on all the valley.

“It is necessary to create a dome at all costs, to protect the Valais and the country. Otherwise, Italy will no longer be in the headlines. It will be Switzerland. ” Sabine Popescu does not mince words. For this doctor from Verbier, time is a very serious issue. Like her, the resort doctors and those of the Maison de la santé de Sembrancher are stepping up and speaking: Verbier is a major focus of Covid-19 cases.

Positive cases, the “tip of the iceberg”

“With the latest results due to fall, we will most likely reach around sixty positive tests for the region,” illustrates Sabine Popescu. When we know that only people at risk go through the test, these positive cases would only be the “tip of the iceberg”.

“For example, we have had a chalet where one person was officially positive, but seven other residents were also sick,” added the doctor.

“It is necessary to create a dome at all costs. Otherwise, Italy will no longer be in the headlines. It will be Switzerland.”

Corinne Cohen, general practitioner at Sembrancher, also hammered: “A phenomenal quantity of people in the valley have symptoms typical of Covid-19.”

To avoid “a catastrophe”, the medical profession begs the Valaisan government to put the whole resort, even the whole Val de Bagnes, under quarantine. “We have no choice. Each day that has passed is one day too many,” laments Sabine Popescu.

A quarantine would put an end to the movements of workers or residents between the resort and the plain. “A mixture of populations is highly explosive. Respect for people’s lives is at stake,” points out Jean-Pierre Deslarzes.

“We have already taken drastic measures to take into account the doctors’ assessment.”

ELOI ROSSIER, PRESIDENT OF THE COMMUNE OF BAGNES

The former doctor, medical consultant to the town of Bagnes, held a meeting with the crisis staff of Bagnes and Vollèges on Friday. During the day, two emails regarding the medical assessment were sent to the Valais government.

One of them was directly relayed by Eloi Rossier. The president of Bagnes is clear: “The municipality will execute the canton’s decision. In the meantime, we have taken drastic measures to take into account the doctors’ assessment. ”

On Friday evening, the general staff announced the suppression of all city buses in Verbier. The owners of residences were also asked not to go up to the resort.

Quarantine is not pronounced for a region

This Sunday, Esther Waeber-Kalbermatten answered the doctors and the authorities. “A quarantine can be pronounced by the canton. But it would concern individuals, not entire localities or regions. We can for example put all the customers and the staff of a hotel under quarantine, not a station “, illustrates the cantonal minister of health.

“The confinement of an entire region falls under the exclusive competence of the Federal Council.”

And put Verbier or the entire Val de Bagnes in confinement? “It is possible, but the confinement of an entire region, an entire canton or the whole of Switzerland is the exclusive competence of the Federal Council,” said Esther Waeber-Kalbermatten.

The state councilor finally said that she had informed the Federal Office of Public Health. Contacted this Sunday, the FOPH (“OFSP”) was not able to immediately answer our questions: Are other regions of Switzerland in the same situation? Does the Federal Council plan to confine certain municipalities in the country in particular? Are provisions made in isolated extreme cases? We will therefore come back to this in our next editions.

In the extraordinary health situation that we live in, the editorial staff of “Le Nouvelliste” are mobilizing to support its readers with precise and reliable information. Our journalism, professional and independent, does not benefit from any subsidy. However, we have chosen to open a large part of our content relating to the essential and vital aspects of this crisis with open access.

More than ever in this unprecedented period, information has value. For us. For you. Let us be united around it. http://abo.lenouvelliste.ch